Our Ancestors were few but our Descendants are many

Currently at the Damar French Quarter Visitors Center from now and through March you can view two unique exhibits. One being a exhibit of over 30 antique irons dating back to the 1600's and through the early 1900's.  They are on loan from Loretta Simoneau Kruse, a former resident.  Also on display is a partial collection of early barbershop memoraliblia on loan from another former resident, Stanley Morin.  Among the items is the original barbershop pole that hung in front of the Dave Roberts barbershop in Damar. 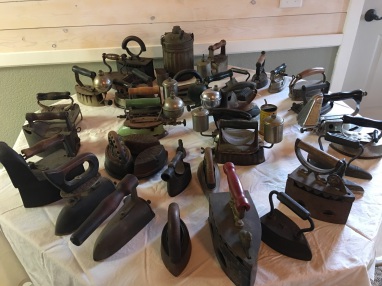 Above are a display of irons.  Some may have come over to America as early as the Mayflower and pilgrims.  Their are coal fired and old stove top heated irons as well as some of the earlier gas fired irons. 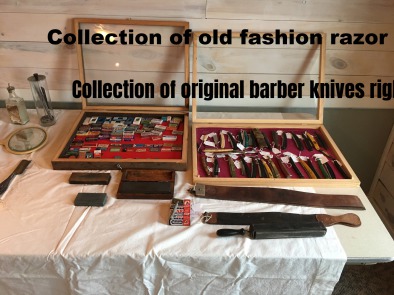 Pictured below is Stanley Morin, left, his wife Barbara and Kaylon Roberts, president of the DCHF.  Stanley holds the original wooden red, white, and blue hand painted barbershop pole that hung from the Dave Roberts Barbershop in the mid 1900's.  Kaylon is the grandson of Dave Roberts and holds a calendar dated 1951 advertising the Roberts Barbershop 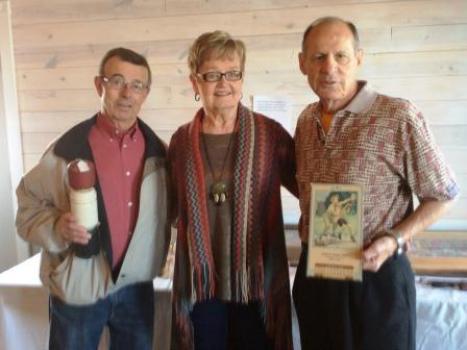 Miniature canoes,  tools, sea shells and other items on display from Micronesia 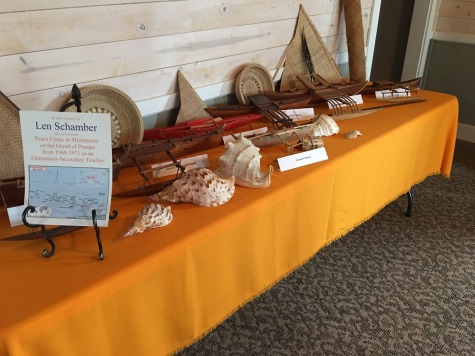 On exhibit now and thru October see Len Schamber's collection of miniature canoes, sea shells, tools and other items that  he  gathered while serving in the Peace Corp on the island of Ponape in Micronesia from 1968 to 1971

Coming to the French Quarters in November   "Christmas Village"

Linus and Deb Pfannenstiel will have their miniature Christmas village on exhibit starting November.   You will be astounded by the  buildings,lights and animation of this little village.  Hundreds of houses,  buildings and people throughout the town all with their Christmas decorations and spirit.  Young and old will enjoy the display so stop by after church on sundays throughout the holiday season