Our Ancestors were few but our Descendants are many

Sharing our history  to students

On March 9th, 2017 Topeka West High school students got a little history on the French Canadian migration to Kansas.   Every year, the School picks a country and studies the history, culture and food, among other things of that country.  This year they chose Canada as the country of study and when they learned that Damar was rich in  French Canadian culture, they sought out someone from Damar to come to their school and tell them  about our town and our ways of the past and present.  Members from the Damar Community Historical Foundation, Len Schamber, Larry Desaire and Ken Curry gladly volunteered to present a program to several classes of 16, 17 and 18 year old students numbering over 60 along with teachers and other invited guest.  Larry was the first to talk about his own ancestry dating back to France in the early 1000's and through their migration to Acadia and Quebec Canada. Ken Curry shared a few words about his ancestry as well.   Len then shared with the classes about the migrations of our French ancestors from Canada and through Illinois into several settlements in Kansas and finally into the Damar area.  He talked about some of our local customs and foods.  Later they shared with the attendees some of the original recipes and  french foods that they brought with them.  The food was prepared  by a few of the local ladies from Damar, meat pies and galattes just to mention a few of the dishes.  Len also  brought with him a short slide show that further  told the story of the founding of Damar and that of our most treasured St. Joseph Catholic church that was built over 100 years ago and still stands as a momument of the Northwestern prairie of Kansas. 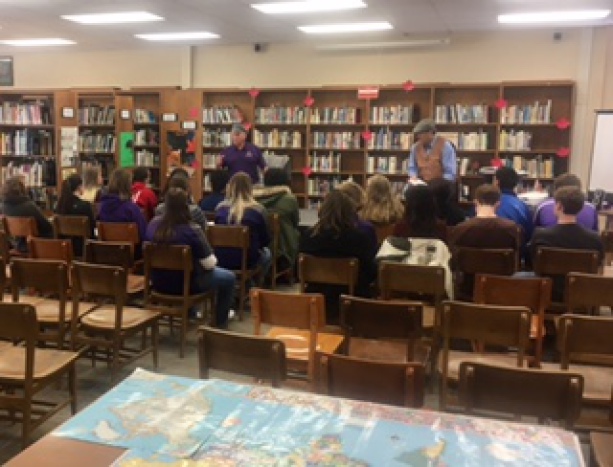 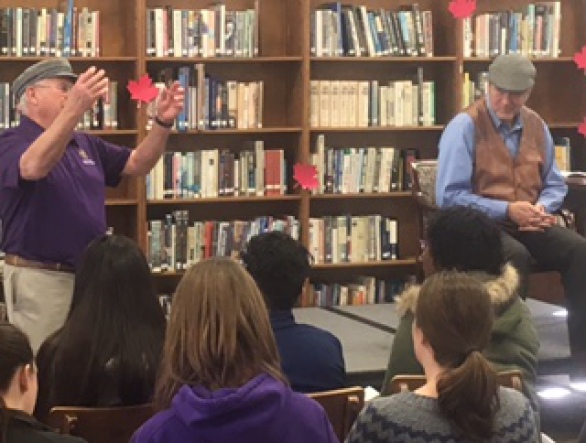 The above photos are Len Schamber standing in the purple on the  left  and Larry Desaire sitting on right as they talk to a class of students.  Below pictured is Len again  along with  Larry as he blows on a hot bite of meat pie. 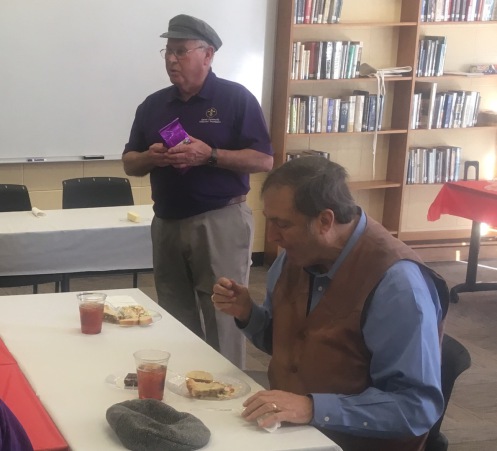 Above  Len serves up a small portion of pie to several students who check out the meat pies.  Yes, class, there are no apples or cherries in those pies. 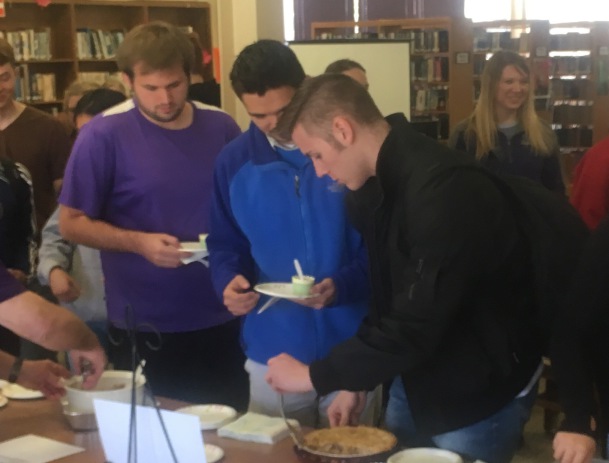 Linda Roy Cross, former native to the Damar area spoke to a group of about 20  on Wednesday June 13th.  Linda, who's father was Johnny Roy grew up in rural Rooks county.  She now lives in Arizona and had traveled back to western Kansas to celebrate with her brother, Father Duane Roy, his 50th anniversary of his priesthood.  Father Roy celebrated mass at the St. Joseph Church in Damar on June 17, much as he did 50 years ago.

Linda shared with the group a slide video and talked about her 500 mile pilgramage walk through northern Spain several years ago.    The walk is called "Camino de Santiago" or "The Way of St. James" and the pilgramage walk is done by thousands every year.  Linda has written a book "Alone on the Camino" and she told of her journey that at the age of 66, she traveled the Camino by herself.  Last year, she made the abbreviated  "Camino" walk of 166 miles along with her 74 year old brother, Father Duane Roy.  At the end of the journey, Father Duane was able to celebrate a mass in the Cathedral of St. James.

This is the second book Linda has authored, the first being "An Ordinary Nunn".  In her first book, she wrote about the ordinary life and tragic death of her own sister, Sister Veronica who was of the order of St. Joseph.  Many of the attending had read the first book and were eager to purchase her second book "Alone on the Camino" which Linda was glad to sign.  She was also scheduled to give presentations in Plainville, Stockton and Hutchinson while she was on her visit and we were happy to host her first stop.

Want to Become a Member?

New exhibit at the French